7.7
Director: Winrich KolbeWriter: Gene Roddenberry, Brannon BragaStars: Patrick Stewart, Jonathan Frakes, LeVar BurtonSummary: While the Enterprise helps repair Cardassian damages to space station Deep Space Nine, an alien approaches Worf, claiming his father was not killed in the battle of Khitomer decades ago but is still alive and held in a Romulan prison camp. Initially, Worf rebuffs this, for the dishonor it would bring his family, but changes his mind and resolves himself after talking to Troi and Data. Worf forces the alien to take him to the predator-infested forest surrounding the Romulan camp but, on arrival, discovers it's not what he expects. Meanwhile, Geordi helps brilliant station scientist Dr. Julian Bashir conduct an experiment with unknown alien technology that unintentionally knocks out Data with a serious plasma shock. As a result, Data experiences a vision of his creator, Dr. Noonien Soong, which he is unable to understand. Written by KGF Vissers/edited by statmanjeff 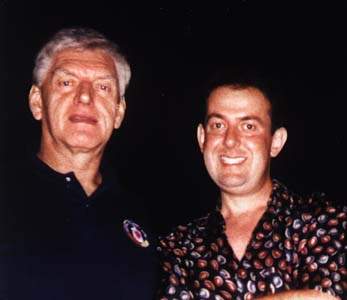