Greetings, salutations and warm regards from deep space nine and yes of course, Quark’s bar!  And what does Morn and do when he’s not sitting on his favorite bar stool talking everybodys ear off?…  I mean, besides gambling at the dabo tables, sparring with Worf in one of Quarks holosuites or enjoying his favorite breakfast; a delicious plate of slug livers…  Well, he does have his shipping business and now that Quark knows that Morn keeps liquid latinum in his second stomach, it’s a sure bet that Quark already has a plan of how he and Morn can do business together.

In 2018 Deep Space Nine celebrates its 25 Year Anniversary of the premier of ” The Emissary” the two part pilot episode and the first appearance of Morn on screen and sitting on his favorite bar stool in Quark’s bar.

The first week of January 1993 also saw Morn on the cover of starburst magazine as well as a Morn action figure.  Hallmark cards began selling “Morn” party invitations.  TV guide magazine, the Los Angeles daily news TV guide insert magazine, Newsweek magazine, star trek magazine all featured pictures of Morn included in articles regarding Deep Space Nine.  And so began a dizzying parade of Quark’s favorite customer Morn in print as well as a character who has a reputation of talking everybody’s ear off.

Morn appeared on the cover of books, even comic books, trading cards even a 3D trading card, hallmark cards published a series of deep space nine fancy gift stickers that also included Morn.  There was an alien’s of star trek necktie with Morn the fifth alien from the top just below Quark.  Pocketbooks New York published the making of Deep Space Nine book, and the first chapter in the book is called “the funniest joke in the universe” about Morn and about how Mark Allen Shepherd came to playing the character role that changed his career.

A publicist for Star Trek Deep Space Nine told me outside stage 17 where quark’s bar and the promenade stage were filmed that in a recent meeting with Deep Space Nine productions, the producers and others spoke with the publicists about complaints they were receiving from the cast members who said that Morn was getting better publicity than they were.

The publicist then went on to tell me that it had nothing to do with them promoting the Morn character more but it had everything to do with the fact that they were currently receiving more requests for Morn in print then they were receiving for some of the other cast members.  This was a problem.  The publicist also told me that every piece of mail that I receive from a fan wishing to contact me that that represents 15,000 fans of Morn who like or have an interest in the character but were perhaps too shy to write in.

The amazing thing about all of this is that never in my entire career and indeed my entire life have I ever experienced anything close to the fanfare as I have from working on  Star Trek Deep Space Nine.  Imagine winning the lottery and over the course of the rest of your life you periodically receive reminders, like strips of latinum that you have won at the dabo table. So, Three Cheers for Star Trek, “Morn,” Deep Space Nine and the millions of fans without whom would this be possible… “Live Long and Prosper.” 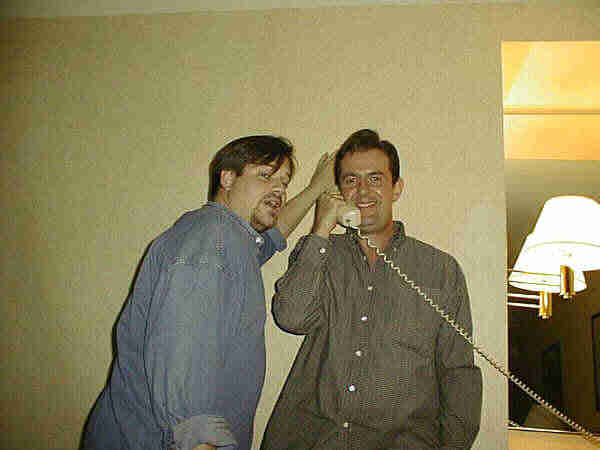