Hello, Greetings and Welcome to my  website.  Feel free to browse as you like where within these pages  you will find  information on “Morn” “Quark’s Favourite  Customer” at Quark’s bar on the smash  hit television series  STAR TREK: Deep Space 9 and yours truly Mark Allen  Shepherd the  actor who played character of Morn from Pilot Episode to Season  Seven Finale.

You may also see some 24 works of Art by Mark  that  were used by the DS9 Art Department as Set Dressing on numerous  sets  including the Quarters of Jake Sisko, Jadzia Dax, Dr Bashir,  Commander Kira as  well as the Quarters of Guest Stars over the  course of the Seven year run of the  Show. Some of the same art  pieces were used as set dressing on the Star Fleet  Conference  Room Set during the filming of The Borg CD-Rom.

Mark’s art work often works as set dressing  on  the sets of various Television Shows, Feature Films and Commercials  and has  been used on the sets of such TV shows as Seinfeld, Coach,  LA Law, Sabrina the  Teenage Witch, Feature films like Galaxy Quest,   Blown Away, Fight Club,  Commercials like AT&T, Campbell’s  Soup, Molson´s Beer and many others.

Since the Finale of Deep Space Nine, Mark has  worked  on various projects not the least of which has been working with  long-time friend and collaborator JC Wegman on several Independent  Animated  Short Films of their own creation. “Just two guys in  a room with two computers”  The way Mark and JC jokingly describe  the Highly Charged and at times Chaotic  Torrent of Creative activity  that was the studio they worked in over the coarse  of over Two  and a half years. A great deal of which happened out of JC´s home  studio and the last almost a year happened out of a space rented  off the edge of  a trendy stretch of Melrose Avenue in Hollywood  California and just down the  street from Paramount Studios.

During that time Mark performed  a number of  jobs including Music Director, Sound Designer, Sound  Recording Specialist and  Editor, Digital Artist, Character Voices,  Computer Tech and Trouble Shooter. We  basically did everything  ourselves and I think neither one of us had a life at  that time.  That’s ok, we loved doing it.

Very few people knew who I was or cared. Boy was I at the wrong convention. Anyway, I was sitting around on Saturday watching people dressed like Scooby Doo, the Pink Panther and looked at convention schedule saw they had a filk competion that night. I decided I was going to enter the competion and that´s when I wrote „Morn to be wild.“

To make a long story short I went to the filk competion,  performed „Morn to be Wild“ before a live audience for the first time and won second prize in the competion! Since then I´ve performed „Morn to be Wild“ at almost every convention to cheering fans. I´ve had several fans tell me that I should record it and even had a few offers from people who had a band or a recording studio. I finnally did it myself starting around Christmas 2002 and finnished it in March 2003.

It´s an ecclectic mix and fusion of different styles including Classic Rock, Classical with a Dance beat , Techno, Jazz, Regae and a few other twists. Very listenable and currently only available at the conventions I attend.

In Fall of 2003 I recorded and produced „Burning Thing“ parody of „Ring of Fire“ which I got the idea for listening to „Ring of Fire“ on the radio the day I heard Johhny Cash had passed away. And some days later heard that the Galileo Space craft was going to crash land on Jupitor.  I was scheduled to appear at the Galileo 7 Convention the following month and wrote the song for that occasion. It all seemed to fit together for a great idea. The cover art shows Morn riding the Galileo space craft(like some kind of cosmic motorcycle) burning up in Jupitors atmosphere.

I wish you all peace and well being. 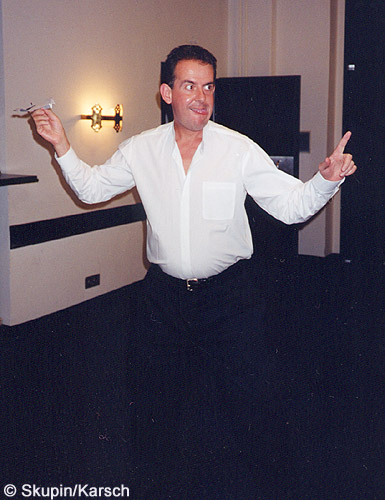