Mark Allen Shepherd Was Born to be Morn – Part 2

Yesterday, Mark Allen Shepherd shared his memories of playing the enigmatic and popular – and unheard – character Morn for seven seasons on Star Trek: Deep Space Nine. Here, in the second half of our conversation with Shepherd, he talks more about Morn, recounts how the show’s production team came to use his artwork on set, and fills us in on what he’s been up to since DS9 ended its run.

Did you love or hate your makeup team?

Shepherd: Award-winning makeup artists Hank Edds and  David Quashnick were my makeup artists, although there were others. David probably did the makeup for Morn more than anyone else. I have nothing but love and respect for those guys. They were my buddies. From 4:30 a.m. til the makeup came off when I was wrapped for the day, whenever the makeup needed touch up on the set or cleanup after lunch, (they were there). They were there when the mask became unglued around my eyes or needed a little extra color or KY jelly to give it a healthy shine.

What more can you tell us about the Morn mask?

Shepherd: I will always be very proud of the work that I did on DS9. Wearing the Morn mask is an inseparable part of that and at the time I just accepted it. An average work day in makeup was about 13 hours. Vincent Niebla, I understand, sculpted the first Morn head that was then used to make the mold from which all of the future Morn masks would come. I think there were 12 or possibly 13 masks made that I know of that were used in filming of DS9. The average was about two masks per season of filming. The first Morn mask was filled and set with glass eyes and went on the Star Trek traveling world tour. Other Morn masks were filled and sent out to various Star Trek exhibits. After the end of the show, Michael Westmore told me, “I think you should have one of these,” and he gave me the last Morn mask. I asked Michael if he liked I would be very proud to give him one of my art pieces. So I went to visit Michael at his home with about five or six of my favorite pieces. The one that Michael picked was a photo mosaic made up of black and white photos that were cut into one inch squares and glued onto an A3-size piece of showerboard that I finished with a clear polyurethane coat.  It´s a dark and complex composition with abstracted faces that somehow has a Picasso-esque charm in an alien or otherworldly sort of way.  Definitely one of my favorites.

How amazed were you by just how popular a cult figure Morn became? Fans loved – and still love — him. You were everywhere, magazine covers, etc.

Shepherd: I was so amazed that I had to collect at least one copy of every magazine that had Morn on the cover or featured somehow inside: covers of Entertainment Weekly, Starburst, MAD magazine, Fangoria, DS9 comic books, as well as Newsweek, TV Guide, Star Trek Magazine, Starlog, Deep Space Nine Magazine, etc. It was unbelievable when the studio started delivering me large manila envelopes filled with fan mail. That went on during the entire run of the show. I´m told that every piece of fan mail represents an estimated 15,000 fans and when I received 1,000 pieces of fan mail that means that some 15 million fans love Morn — a character that never said a word in the seven years that he was on the show. That´s how amazed I was. I was told by a publicist for the show “Did you know that we´ve been told by production to tone down your character a bit because we are starting to get more requests for pictures of Morn in print than some of the stars of the show.” In Germany, where I live now, there was a Star Trek 50th anniversary feature done in the local TV Guide & Movie magazine that had Morn listed number five in a top 10 list of the Most Curious Stories in Star Trek History. It´s just one of those things that has almost a magical quality to it and seems to take on a life of its own – and it’s something I´m very grateful for.

You also provided your artwork to the show. Take us through that. How did it happen? What pieces were you proudest to see on TV?

Shepherd: Well, I remember the week after Morn appeared on the cover of Entertainment Weekly magazine that at lunchtime the production crew opened the big doors to the stage and in walked Mickey Michaels and Penny Juday of the DS9 art department. And they both at some point noticed me and said something about the magazine cover and my reply was, “Thank you and, if you like, I´m also an artist and would love to show you some of my work.” I was working the next day, so I brought in a large-format 24×48-inch Kodak photo pager box filled with paintings that I did. I showed it that day to Penny and Mickey Michaels, who were immediately impressed and told me that it was exactly the sort of thing they were looking for to use as set dressing in quarters of the main characters on the show.

So, the following day, I had the day off and came back and worked out a deal. And since then I had some 24 works of art of mine used as set dressing, including bold and colorful abstract water color paintings, photomosaics, collages, as well as works of mixed media. I was also referred to a local prop house that supplies props for set dressing to the entertainment industry in Hollywood. There I was fortunate to have several other works of mine, including large format photographs, paintings and others that continue even to this day to go out periodically to work as set dressing on various productions. I still get checks a couple times a year from them for the use of my artwork.

Where are those pieces now?

Shepherd: Not all of the pieces were accounted for. After the show ended and I went to pick up my art, it was discovered that some pieces had mysteriously disappeared. For those that disappeared, I can´t say. Many pieces got auctioned for charity at William Campbell´s Fantasticon, which donated proceeds to the Motion Picture and Television Fund — which supports the Country House and Hospital for Actors and their families. Campbell some might remember played the Klingon Captain Koloth in the TOS “The Trouble with Tribbles” and the super-being Trelane in “The Squire of Gothos” (and also guest starred as Koloth on DS9). Some of my prop art pieces were sold and some I still have.

Who from the old days are you still in touch with?

Shepherd: I am always happy to see old friends from DS9, other shows and of course the fans at conventions. I have a Facebook page, which I find is a great way to stay in touch with friends and family that I would probably be out of touch with otherwise. I have a lovely wife and a family, which take up most of my time. Other than that, I´m in love with my private life, which, fortunately for me, (was protected by) wearing the mask of Morn for seven seasons of DS9. I can go anywhere I like and be anonymous, with the exception of conventions or when I choose to break my anonymity.  That´s not to say I´m not interested. I love to work and will work with anyone that wants to work with me.

What would you like to think Morn is doing these days?

Shepherd: Morn found life outside of the bar and is perhaps gallivanting across the galaxy somewhere on the adventure of a lifetime. Morn will be back though, if only to visit Quark´s — his favorite bar. It’s a familiar haunt that possibly still echoes with the laughter of his friends and the sound of his name.

What have you been up to post-DS9?

Shepherd: I act whenever I can. I have an English conversation class that I teach every week and a qigong class I´ll teach that starts later this month. I’m continually studying photography and now work mostly in Camera Raw, a professional digital format. Most of my artwork today is digital as well and exists virtually by the miracle of computers. I spend two or more hours a day studying my craft.

I played the character role of King Fernando in a feature film that takes place in the Middle Ages and has a story that centers around the Knights Templar. It’s called the Knights of St. Albans, directed and produced by Axel Loh, a German filmmaker. That is scheduled to be finished sometime next year. I periodically get asked to do English-speaking voiceover work. I produced a DS9 parody music video to the Steppenwolf song “Born to be Wild” called “Morn to be Wild.” My lovely wife Tanja and two beautiful kids are by far my greatest achievement and what I´m most proud of. And I´m involved in project called Gatekeeper, which I´ll be filming in Sweden and Norway later this year. That also coincides with a sci-fi convention in Stockholm, Sweden, in the beginning of December.

Where do you keep your Morn action figure?

Shepherd: Morn stands just in back of the right-hand corner of my computer keyboard and in front of my computer screen. He´s always there in front of me, just a little reminder of my own adventure of a lifetime and the tremendous experience I had playing Morn on DS9.

To read part one of our interview with Mark Allen Shepherd, click HERE. And to visit Shepherd’s official site, click HERE.

This site uses Akismet to reduce spam. Learn how your comment data is processed. 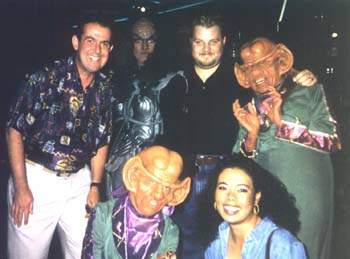