Hi There, Spring has Sprung! Everywhere (except the Southern Hemisphere) the life of new buds, leaves and flowers emerge from the cold dark winter. The I Ching (Chinese book of changes) represents Springtime with “Chen” a hexagram which translates approximately as “Thunder.” An excellent time of year for new ideas and promoting new projects.

I’m currently busy digitally remastering (soon to be released) “HunTon FunOne” a remix of “Slappy Woot” a Plural Dolt music Cd that I originally produced about five years ago. At that time we were distributing the recording as an audio cassette and were somewhat limited by the technology that we had at that time. Now, Wow is all I can say about the new CD. It’s like when they switched over from black and white to color in “The Wizard of OZ.” Anyway, I’m very excited about the changes think audiences will find “HunTon FunOne” my wildest and craziest Cd yet. You’ll tell your friends “WOW I’ve never heard anything quite like it… It’s like Frank Zappa meets Spike Jones on Forbidden planet… definitely Morn’s wildest and craziest CD yet!”

For anyone interested in the “HunTon FunOne” by Plural Dolt (my band) or want to check out my music in general go to http://www.springbreak88.com where I do Music, Voices, Art etc. for cartoons produced by JC Wegman and myself. I should have a sampler for “HunTon FunOne” the NEW CD on that website soon along with information on how to order a copy. So check back often.

“SPOT MARK’S ART” on DEEP SPACE 9 a contest I recently started gives the Hardcore Trekkie a real challenge apart from figuring out the true significance and deeper meaning behind the characters and plots of various STAR TREK episodes. I mean here’s a real opportunity to for those who know more about STAR TREK than STAR TREK. I mean… is The Captain’s tupe really a Tribble in disguise or what? Hey, You can WIN!!! an autographed, personalized, RARE limited edition, signed and numbered lithograph self portrait of me as MORN or a copy of some of the cool art work I did that were used on the DS9 set’s as set dressing. Ok, Ok so it’s not a new car, a palm pilot, or an all expenses paid vacation for two aboard the new space station. But check it out… your odds of winning are a lot better than getting hit by lighting and you’ll have the satisfaction of being the first to find out something about DEEP SPACE 9 that very few people know or even care to.

Well, for those of you who went to Sydney, Australia in search of Morn in “The Land Down Under” this last February; The convention was cancelled and the date changed to August 4th, 2001. I’ve been writing to the producer of the show but have yet to have them confirm or cancel the new date which was set by them back in January. Hopefully I’ll have an update on that for you all soon. Check out the Conventions page for other exciting opportunities to meet Me, Mark/Morn. Till then..

“In The Future…” MORN 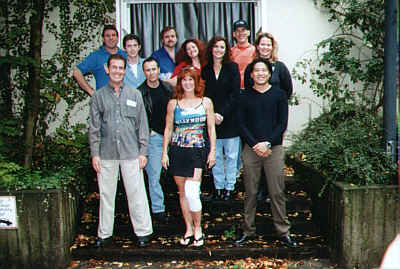